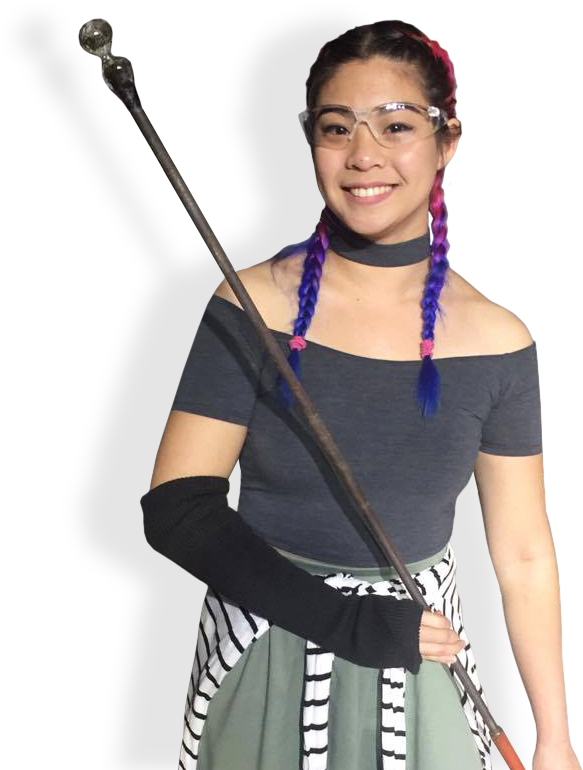 Anna has been exposed to the art world ever since she was a child. Glass as an art medium is not only one that she chose, but one that she was also born into. Her father, Ramon Orlina, has been a self-taught coldworking glass sculptor since 1975. He is even considered as the “Father of Philippine Glass Sculpture”.

Anna graduated from De La Salle – College of Saint Benilde, one of the top art schools in Manila, where she received a Bachelor of Arts Degree in Multimedia Arts. There she learned the basics of art, graphic design, photography, film, web design, 2D & 3D animation, and sound design.

After college, she and her sister co-founded Tagaytay Art Beat, an arts and music festival aimed to promote up-and-coming local visual artists and musicians. The event is held roughly every 2 years in their father’s glass museum, Museo Orlina located in Tagaytay, Philippines. Anna holds the position as the Art Director and Curator, in which she select the visual artists to feature and curate the gallery exhibition. After its first event in September 2015, Anna worked as a Gallery Manager in Secret Fresh Gallery for 6 months before leaving to focus on herself as an artist. Anna created my first glass sculpture in collaboration with my father, using his technique, which was included in one of his solo exhibit shows.

Living in the Philippines does has its challenges in the world of glass art as the medium is very rare and uncommon to see there. Her father’s method is mostly self-taught and his pieces of equipment are self-fabricated. This is why it is quite different from the methods and techniques taught abroad.

Because there are no glass schools in the Philippines and Anna decided to take summer intensive glass courses abroad to learn more about glass, the different techniques, equipment and hopefully to be able to bring it back and apply it in the Philippines.

In 2016, Anna went to Pilchuck Glass School in Stanwood, Washington State in the US, during its 6th summer session and took beginner glass blowing with Rui Sasaki. Her brother, Michael Orlina, also enrolled with her but took a different class with Anna Mlasowsky and Matt Szosz. In November 2016, she helped organize the exhibition and demo of Czech glassworker, Jiří Pačinek at Museo Orlina in Tagaytay. He brought with him his portable furnace from the Czech Republic and it was the first time they had a live public glass blowing talk and demo in the Philippines accessible to students and artists.

In October 2018, Anna attended the 13th International Glass Symposium in Nový Bor, Czech Republic. She then stayed in the Czech Republic, enrolled in Vyšší Odborná Škola Sklářská a Střední Škola, Nový Bor, also known as the Glass School in Nový Bor for 1 month. It is a high school that offered “higher school”, a level above high school but lower than college. She also attended 3 glass workshops organized by Kolektiv Ateliers: Tiffany Stained Glass by Pavel Jablonský, Sandblasting by Daniela Divišová, and Glass Painting by Olinka Stankova.

In March 2019, Anna returned to the Czech Republic and continued studying in the Glass School in Nový Bor for 3 months focusing on coldworking, specifically cold cutting. During this time she was also able to acquire coldworking glass machines for her to bring back to the Philippines.

In the summer of 2019, Anna went to Pilchuck Glass School during Session 2 and took glassblowing and engraving with Sarah Gilbert and Jaroslav Šára. Every year, she tries to go abroad to learn new things about glass and experiment with it as much as she can when it is accessible. Anna has now started her own coldworking studio in Manila, Philippines which finished in June of 2022. She has started to make some glass works and sculptures.